“I grew up in Manningham, so the park and Cartwright Hall were close by. We pretty much went every week, because it was something to do, it was free and available,” recalls Gemma Hobbs from Keighley Creative. “From a tiny tot up until early teens we’d walk around the gallery, art of the ages on the walls. It just felt extraordinary and ordinary at the same time.”
“I wasn’t reading about stuff, I was just looking at pictures and telling stories and finding ways to resonate with them,” she remembers. “We tell stories in our heads all the time about the people we love and the world around us, so for me it was all about connecting art with my imagination and then it became a part of my world.”
Gemma’s wonderful outlook on life finds its origins in her childhood experiences. “People often have a negative perception of what Manningham was like in the 80’s but it was a really lovely place to grow up. Mum didn’t drive, so we went everywhere on foot and so it was about those little interactions all around you. The variety, spice and colour of the place was really exciting and I didn’t have any idea about racism, as far as I saw it we were all in it together and felt very much at home in a multicultural place.”
The local culture of acceptance was really valuable to Gemma’s family. “I grew up in a single parent family, which was still unusual in the 80’s, but there was a strong sense of being allowed to be different within Manningham.”  Amidst these vibrant surroundings, her mum focused on creating a small and safe place for Gemma and her sister, whilst initially homeschooling them encouraging plenty of free and creative play. This was massively influential in developing Gemma’s own love for the arts.
“Bradford is the most amazing place, which is often seen as an underdog, but there’s so much going on under the surface of this city. The depth of humanity here is incredible. Gemma bubbles over with energy as she speaks about her love for hearing stories without any preconceptions. “On a bus it’s weirdly safe to share a story, because you may never see that person again, and I’m always taken aback by how much someone will share with you in the first five minutes of meeting them. I have often found myself missing my stop just to listen to the end of a story,” she laughs. “It just demonstrates how much we want to connect with each other and that sharing is such an important part of being a human.”
Speaking about lessons from a childhood of Saturdays spent at Cartwright Hall, she explains, “If you see something that somebody else has created and you connect to it, you identify with them through a shared way of seeing the world. It’s both cathartic and exciting and it opens a door…Art is a conversation starter for me, .”
It was her first teacher in formal education who breathed life under her creative wings, when as a shy child she presented a drawing alongside her written story. Mrs Phillips responded, ‘Oh, I see you’re an artist!’  which Gemma describes as ‘a nugget of gold’ that she grasped hold ofand eventually led to her studying Art at Leeds Metropolitan University.
“I lost my way pretty quickly at Uni. Leeds is an incredibly different city to Bradford, it’s enormous with so many people and the degree was too unstructured for me at such a young age. I actually lost my love for art, probably because I hadn’t found my voice back then,” explains Gemma. “Sometimes you stumble across bits of yourself that feel very true and comfortable and so you ‘run with it’. Other times you find yourself out of your depth and have to work out ‘how to get back to you’.” 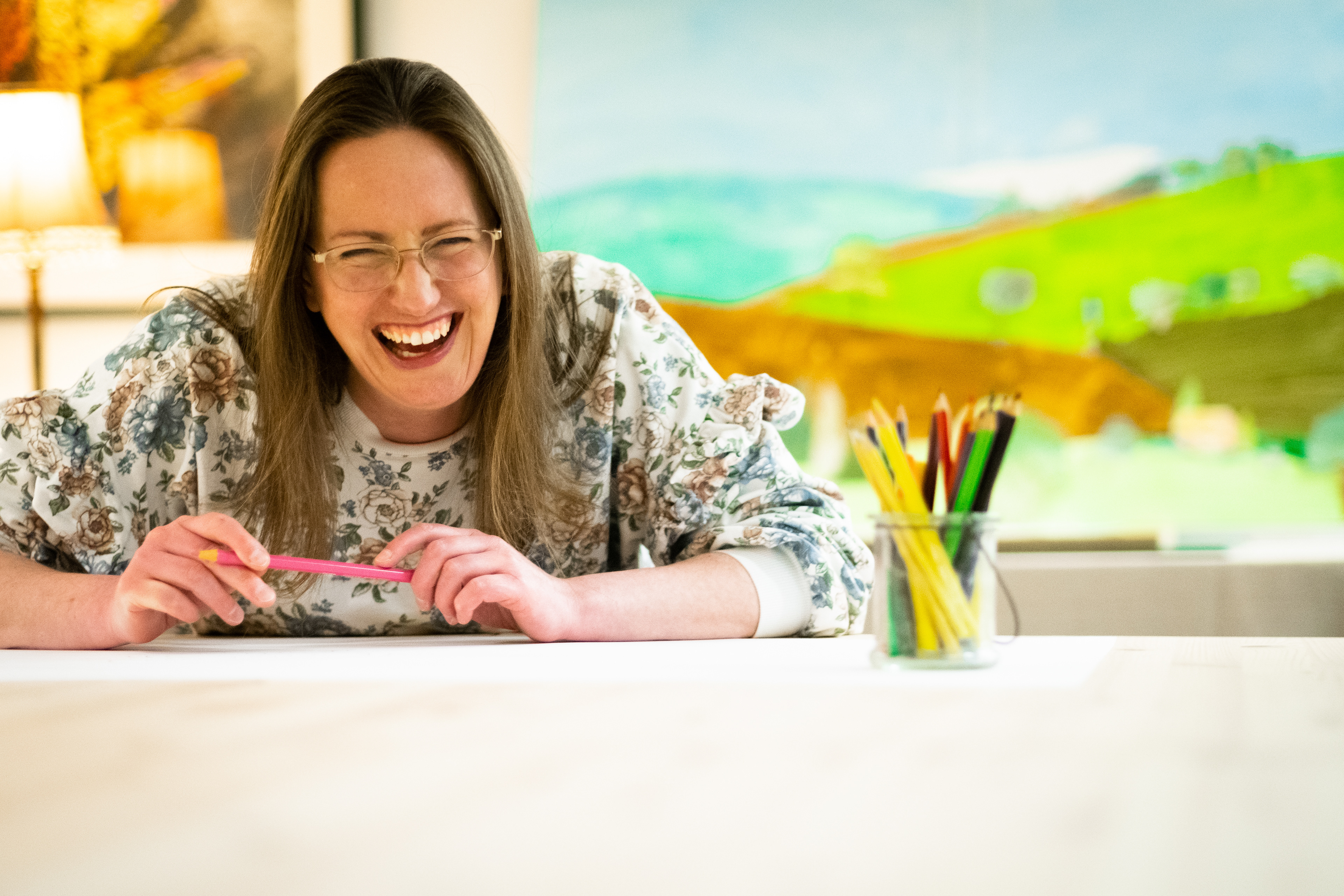 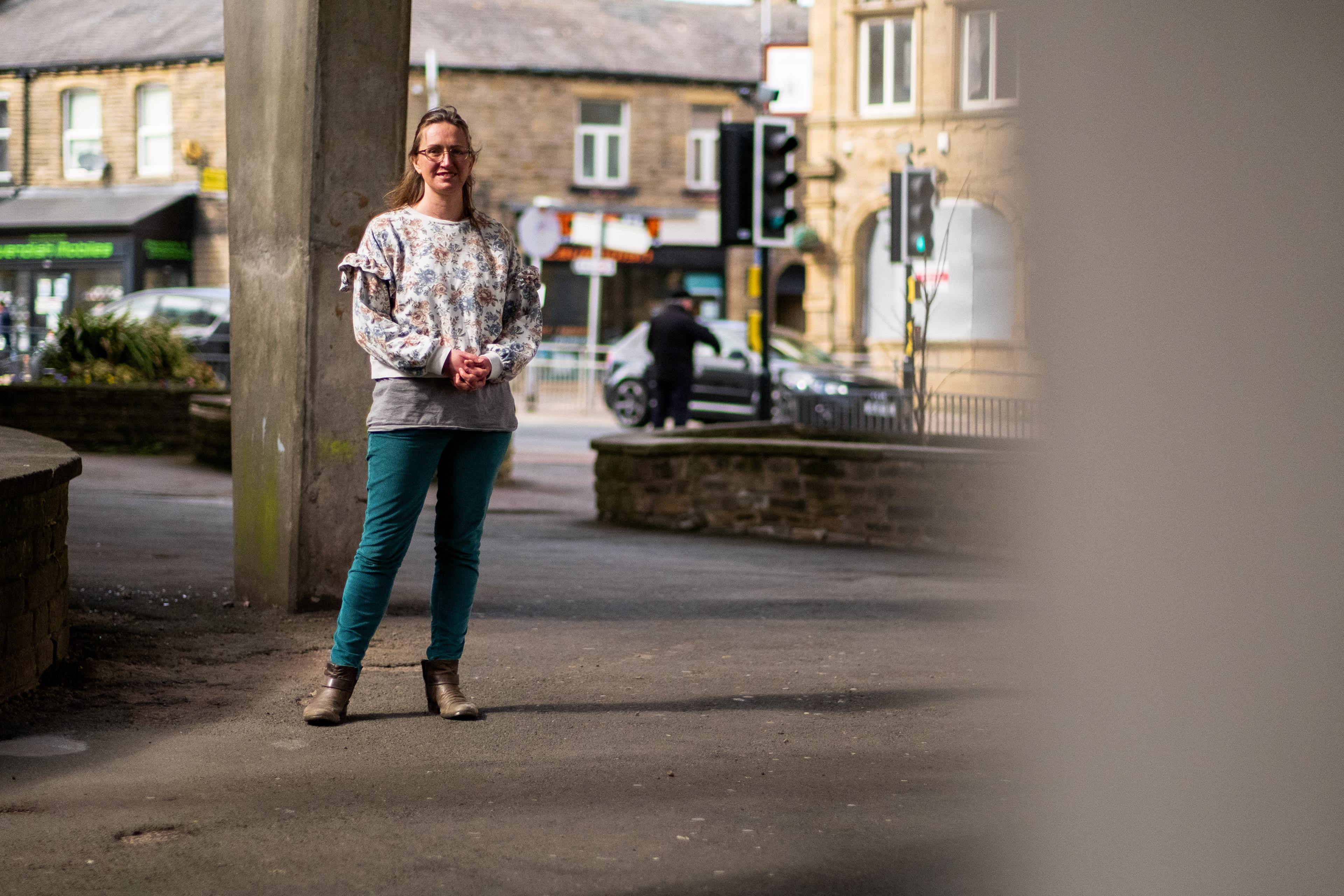 The road home to art for Gemma began a few years later after meeting Jane Fielder, founder of Bingley Gallery. “She’s a champion of local artists, not judgemental and incredibly giving of her time and space. She recognised things in me that were special and gave me the opportunity to express them,” Gemma recalls affectionately. “Finding my voice was very much about coming back to the connections between art and the community. I’m interested in what everyday people like about art and how this creates new art histories.”
Gemma explains the struggle she had with finding her voice. “The world can be a tricky place for an introvert. My own voice is quiet, and I’m often having to make it louder to be heard, which can be uncomfortable. I like to listen and be taken on a journey with someone else’s story, it’s a questioning voice and it helps to open up new ideas. In hindsight, I’m not an artist in the way I once thought. I’m still figuring this out, where my creativity fits in the world. I think finding your voice is a lifelong thing.”
Over the last few years Gemma has been exploring these new ideas at Keighley Creative – her involvement and volunteer time are enabled through project grants and her freelance design work. She’s been working hard to bridge the gap between art and the general public by developing spaces and programmes in the town centre. “It’s really important to me that what we do is accessible, that nothing stops people getting in, so they kind of fall on it as they’re going somewhere.”
She has also set up an arts educational space called ‘The Orange Room’, along with an exhibition gallery in the former Sunwin House building. It provides a venue for local artists to develop and exhibit their work, and she wants the space to be an easy route for extended learning and opportunities to nurture locals’ hobbies and careers.
Gemma is a woman on a mission to give people the courage to create. “There’s an element of bravery when you share what you make, a fear of being judged, which is why I think a lot of people say that ‘arts are not for me’,” she states. “Art is all around us and I want to make sure that it isn’t seen as an elitist thing. I really want people to discover the diversity of opportunities within the arts. There’s something for everyone and the creative industries are a huge work opportunity.” 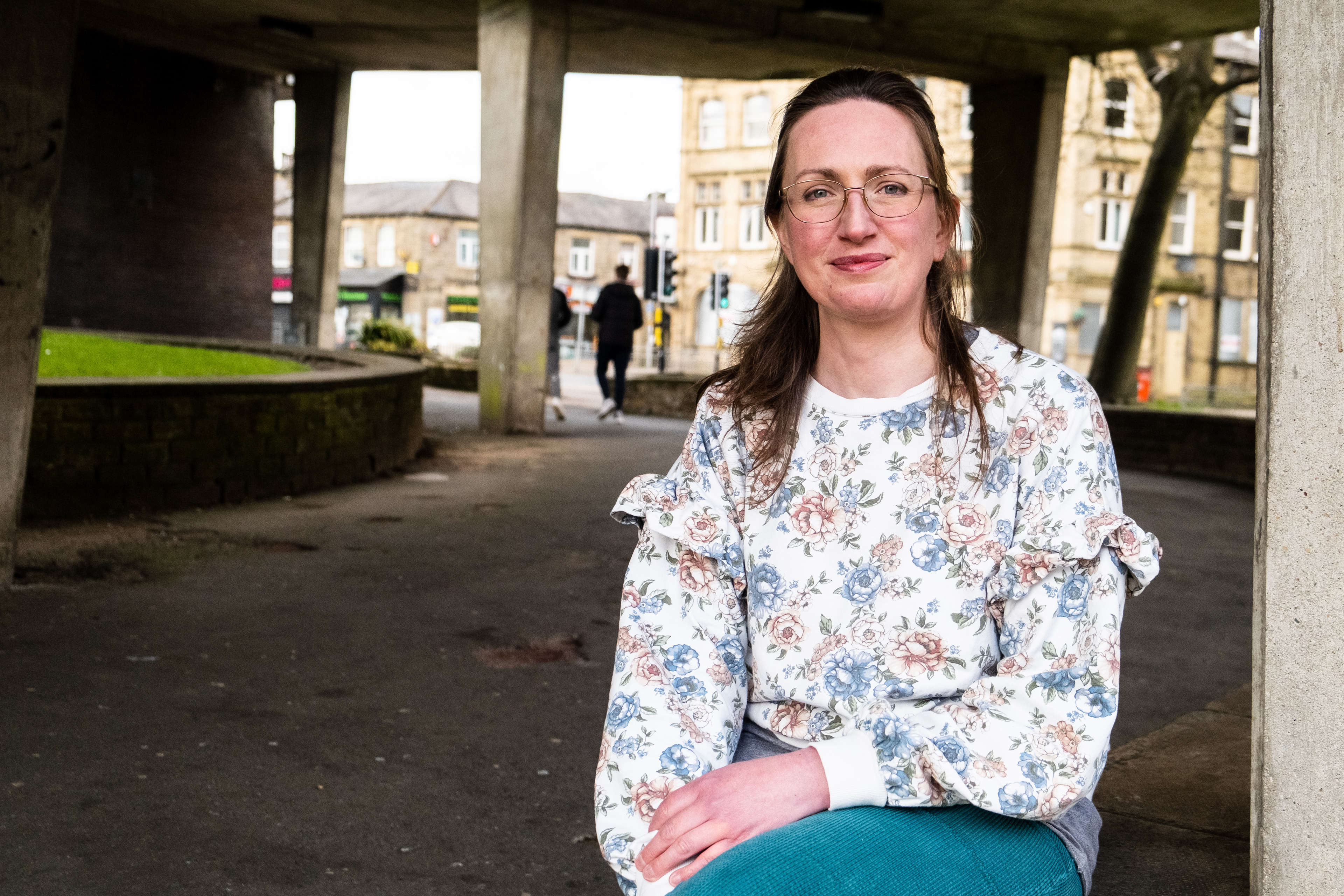 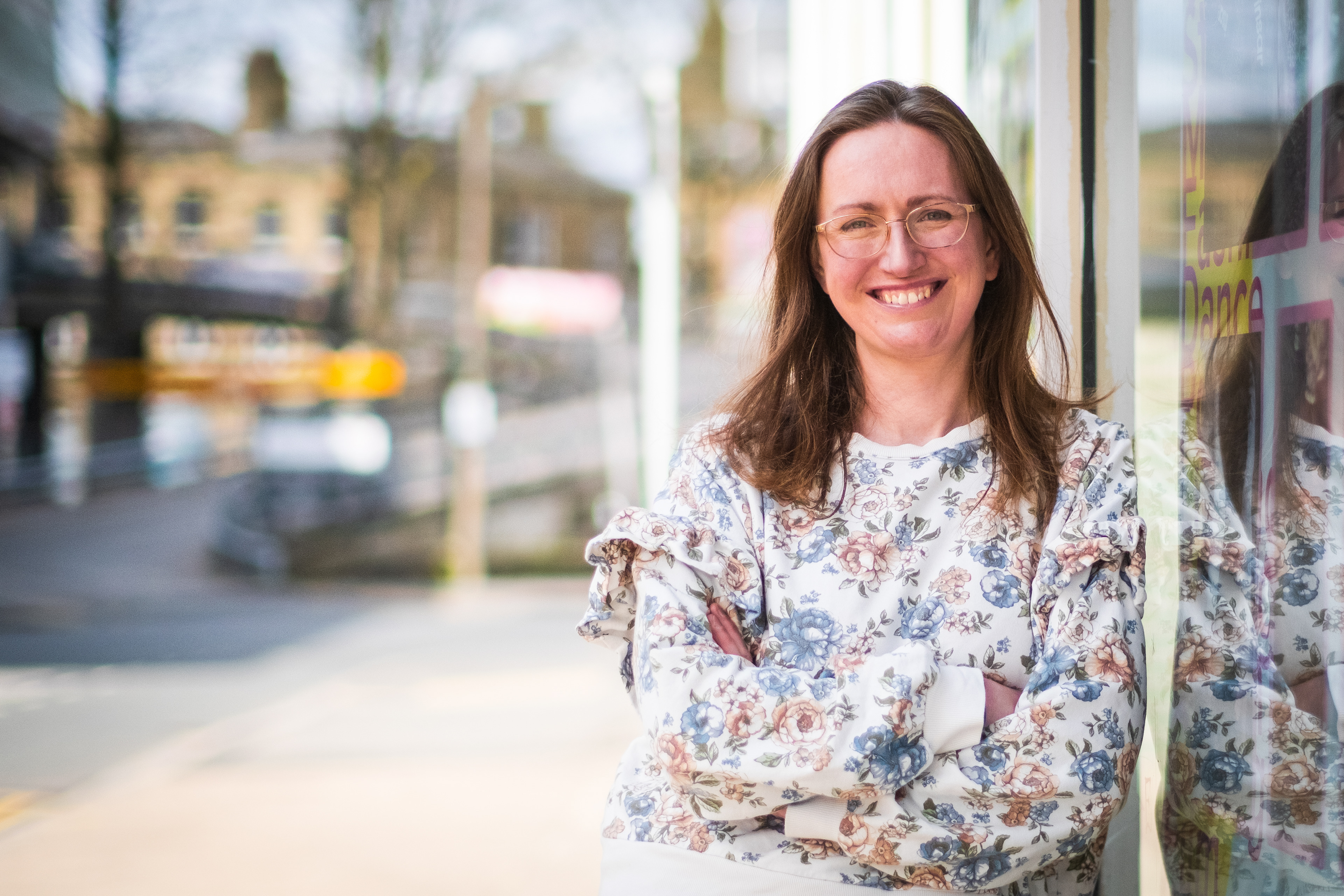 Her passion for what she’s creating is tangible. She describes, “I want the space to be very alive, dynamic and interesting, full of story and conversation starters.” Before the pandemic she got a taste for the huge potential of these community spaces, “It brought so many people together from so many walks of life. For instance there’s a great filmmaking and spoken word scene in Keighley. We also ran art classes for adults, people living with dementia and their carers, and so many people stopped by and ended up telling us their stories.”
Throughout the pandemic Gemma and Naseem Darbey, a friend and collaborator at Keighley Creative, continued the momentum, launching ‘The Drawing Box Project’ which saw 500 boxes of art materials distributed to people across the area, leading to a national Award for Excellence in Gallery Education.
The award and exposure is just icing on the cake though, and she remains focused on building a platform for stories to be shared. “In community arts we often talk about making change, but actually I feel it should be more around hearing what’s being said in an honest way. The act of being heard is one of the most powerful things that can happen to someone,” says Gemma.
Hearing Gemma talk about how art and stories can play a role in building our society, you get an insight into her core beliefs about life. “Art is a conversation starter that helps connect us with the people and places around us, which is exciting because it helps us feel involved in life and that’s what makes life fun. It ensures people feel welcomed and I believe it’s so important for people to feel special and heard.”
She concludes, “Art is about feeling something and I’ve been afraid of that in the past. I often feel deeply moved and honoured by hearing a story, and I now want to capture those stories so other people can hear them.”
It certainly feels like a chain reaction has begun within the Keighley arts scene. Through finding her own voice, Gemma is now able to help others find their voice too. She believes that “power and resonance happen when voices are joined together”. Her life is all about building a community of kindred spirits with a common voice that has the potential to connect everywhere.
↑Back to Top