“I had everything going for me growing up, but it would strike fear down my spine every time I was asked to read a book in front of people,” says 42 year old Gareth Davis. “I would try all sorts of things to get out of doing it, but when it came to sports I would thrive,” continues the Bradford City FC Community Foundation coach, “So what I’m doing now with ‘Reading Bears’ is because I didn’t want other kids feeling the same way I did about reading.”
There’s a wonderful quote by children’s author Dr. Seuss about the gift of literacy which says: “The more that you read, the more things you will know. The more that you learn, the more places you’ll go!” It’s this ‘opportunity-creating’ gift that Gareth wants to give to every child struggling with literacy in the schools of Bradford and beyond.
Speaking of his own struggle, he remembers “My parents were always back and forth with my teachers about my attitude because whenever I used to read to someone and got to a tricky word I’d cave in, throw the book down and cause a scene, because I didn’t want to be embarrassed.”  The reason behind his own literacy struggle was only uncovered three months before sitting his GCSEs when he was diagnosed with dyslexia.
After school, Gareth decided to work for Royal Mail as it gave him flexibility to continue his passion for football. His redundancy in later years provided a great opportunity to be re-skilled. “The careers advisor asked me what qualifications I had, and I said I don’t really have any – all I know is football,” he recalls with a smile, “I was very fortunate after that, because Royal Mail paid for me to go through my coaching badges with the FA & UEFA.” This pivot in Gareth’s life has allowed him to convert that same passion for football into a career, and he has since coached at Leeds United and now Bradford City.
In the last five years the Premier League has launched a new initiative called ‘Premiere League Primary Stars’ through its charitable fund which supports local football clubs to share skills and ideas within local education and vice versa. It’s a wonderful partnership which has led to the popularity of football being used to enhance education and also many coaches are now taking teacher training qualifications so they can apply the same learning environment and techniques used at school within grassroots football. 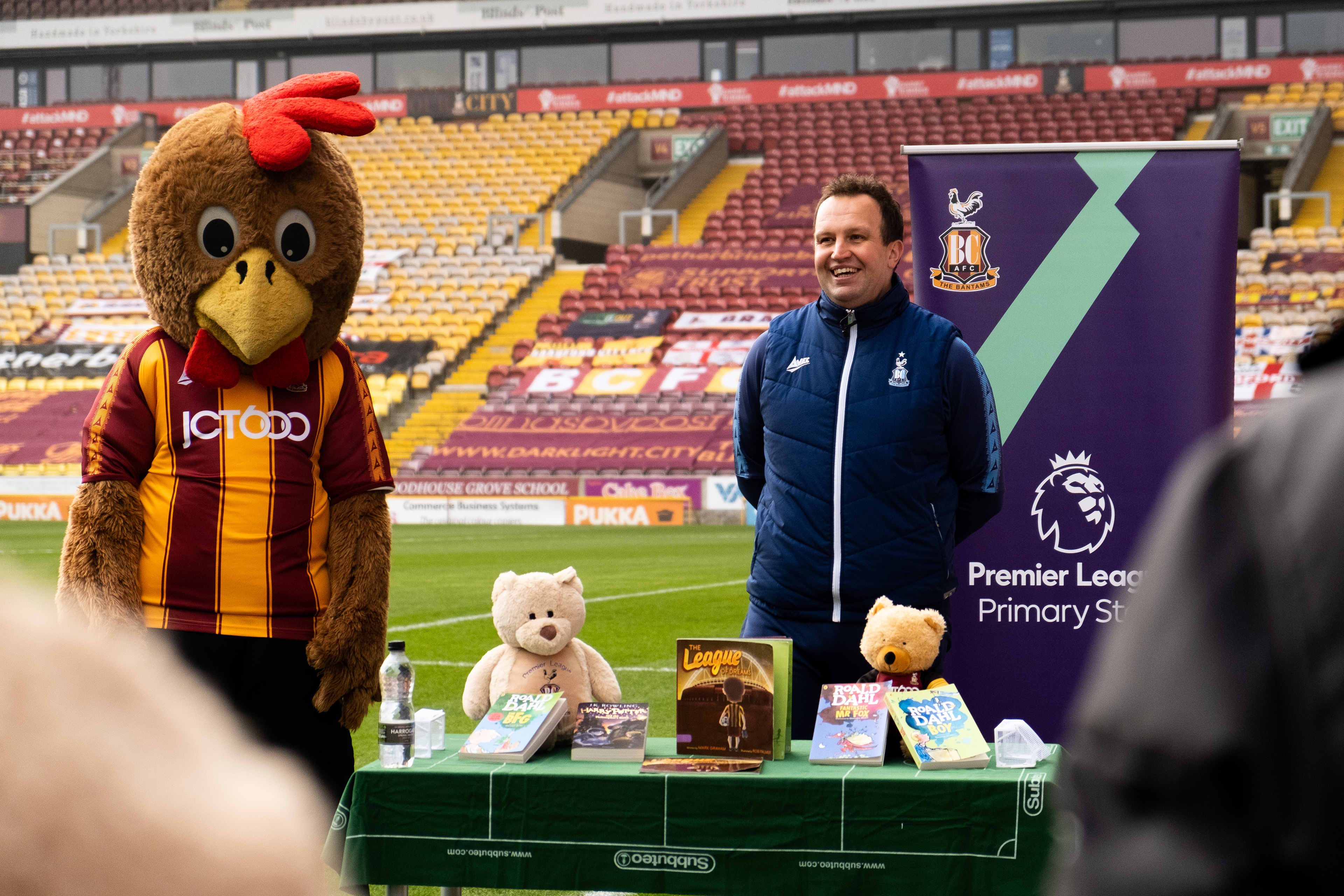 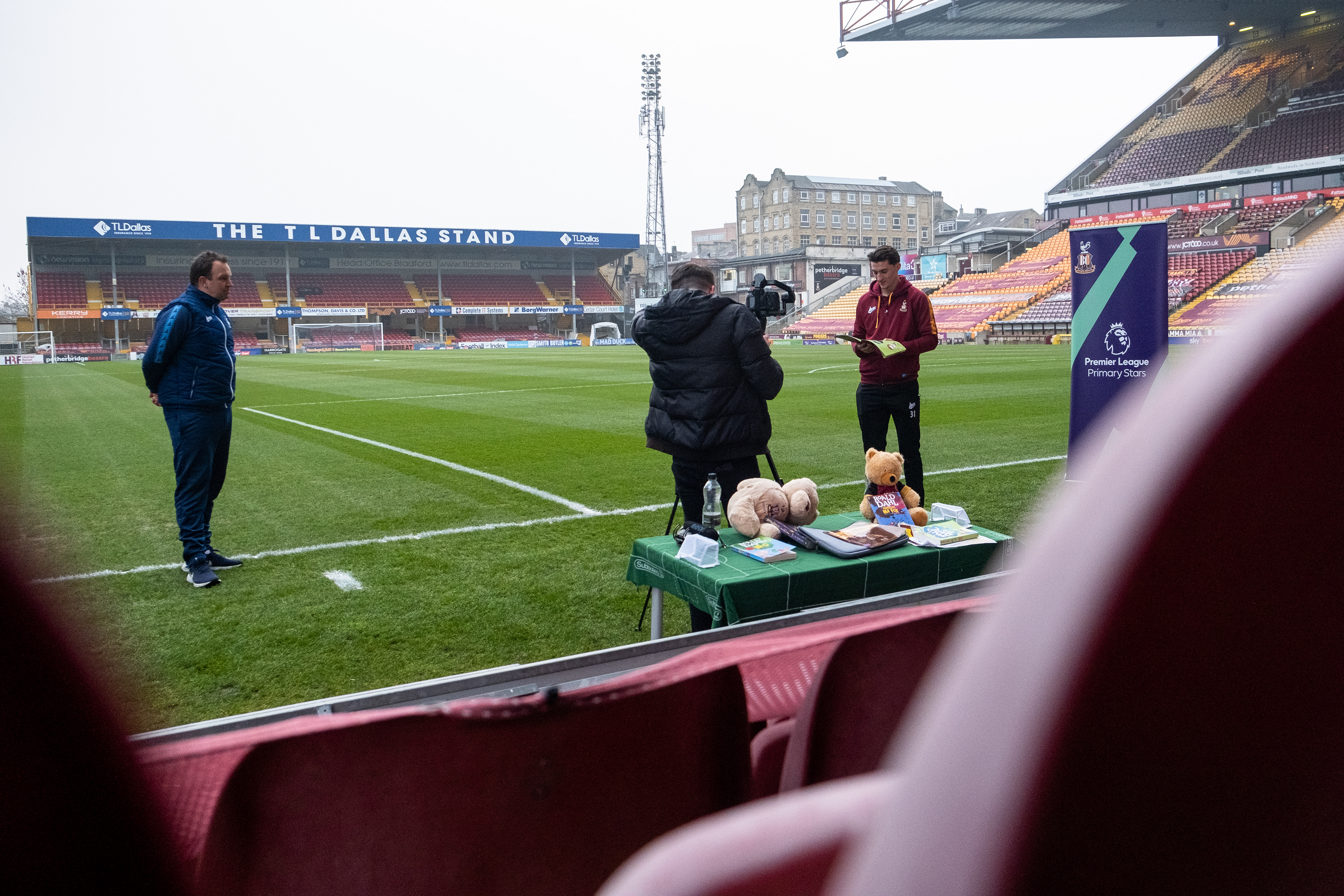 During Gareth’s teacher training he visited the National Literacy Trust in London and heard a talk by Jim Sells (Schools Partnership Engagement Officer) speaking about how they used dogs in the classroom, letting children read to a friendly canine rather than to an adult. Gareth loved the concept and knew what a difference this would have made to his life, and it set him down the path of developing a new literacy programme for children in Bradford.
Bradford’s literacy rates are in the bottom ten percent of the UK. “There are an estimated four thousand children who don’t have any books in their homes, and boys are often the underachievers,” he says. “I knew bringing dogs into schools would be a health and safety challenge so I decided the next best thing would be to use my old teddy bears that I found in my mum’s attic. I spoke to a school that I had a good relationship with and pitched the idea to them.” The school said yes, and ‘Reading Bears’ was launched.
Now three years later and over 250 children have taken part, with an amazing 95% improvement in reading levels and 65% improvement in enjoyability. “It’s a six week programme for primary years three and four and it’s all about linking literacy to football. If we can catch them at that age it’s more likely to be successful because if kids at 16 can’t read a job application, what chance have they got,” Gareth explains. “It’s very simple, the lessons are only twenty minutes long and then we let the children take a bear away and read to it. We’ve taken kids who are not reading at all, to standing up in front of class and reading to their peers.”
The beauty of this programme is they only take six children at a time, which means more devoted attention to those that may really need it, and when children read to a teddy bear instead of an adult they lose the pressure of getting it right. Gareth puts it like this, “For me it’s about breaking stigmas and not perfect reading. Would you rather a child read three pages and maybe get the words wrong but believe they’ve got it correct, or would you rather a child get stuck on a tricky word and then kick off because they think they’re useless and not worthy of being in the classroom?”
Gareth and his team are using their position of influence within the world of football to ignite passion for literacy within children who have often really struggled with reading. “Literacy is the grounding of everything in life, but often children don’t see how it relates to them,” Gareth says passionately. “If someone had come to me when I was twelve years old and said to me that ‘to be a footballer or coach you need to read’ I might have read a bit more. These days if you want to play professionally you’ll have diet plans, dossiers about your opponents and contracts to read. When I was young it was never linked to something that I wanted to do.” 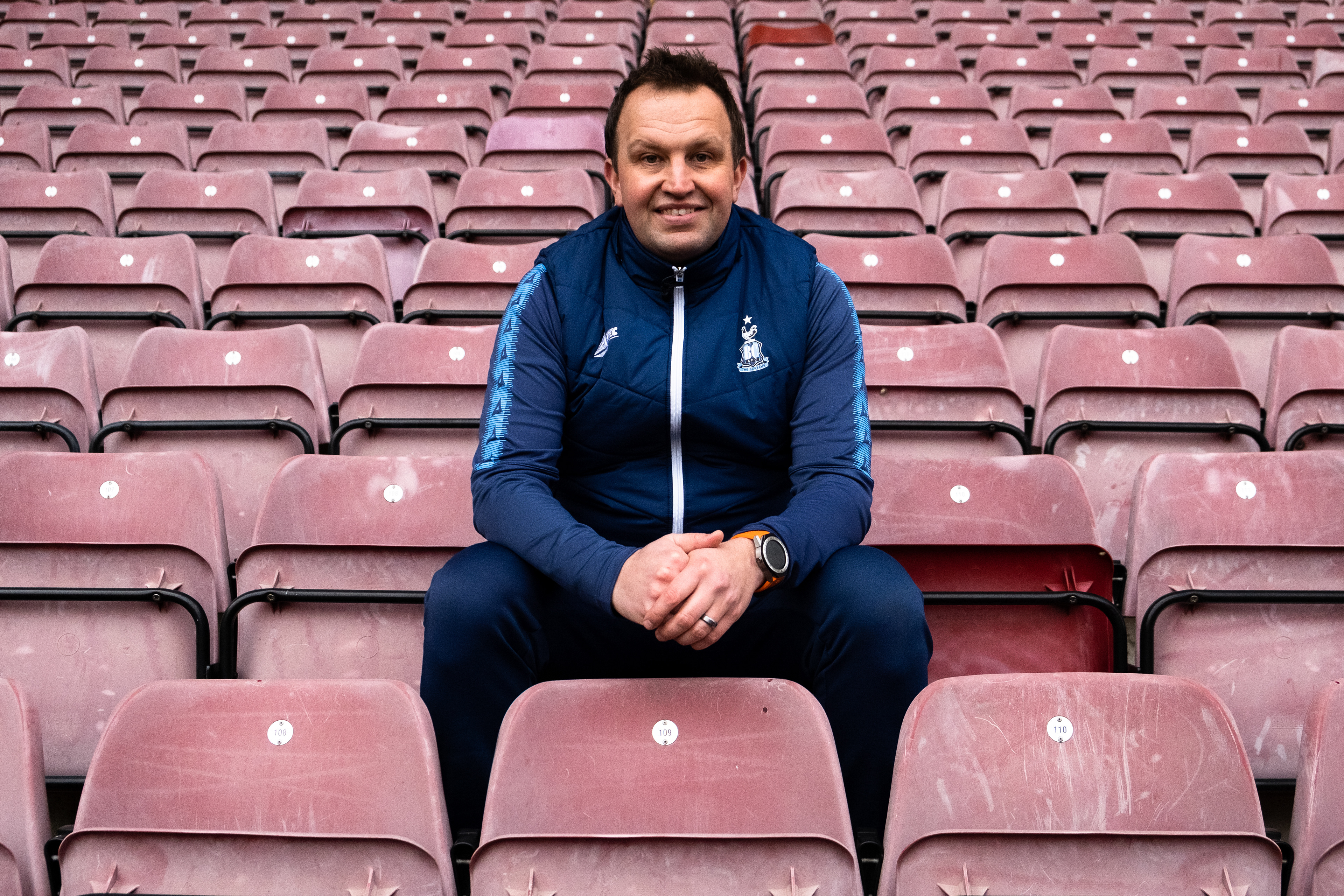 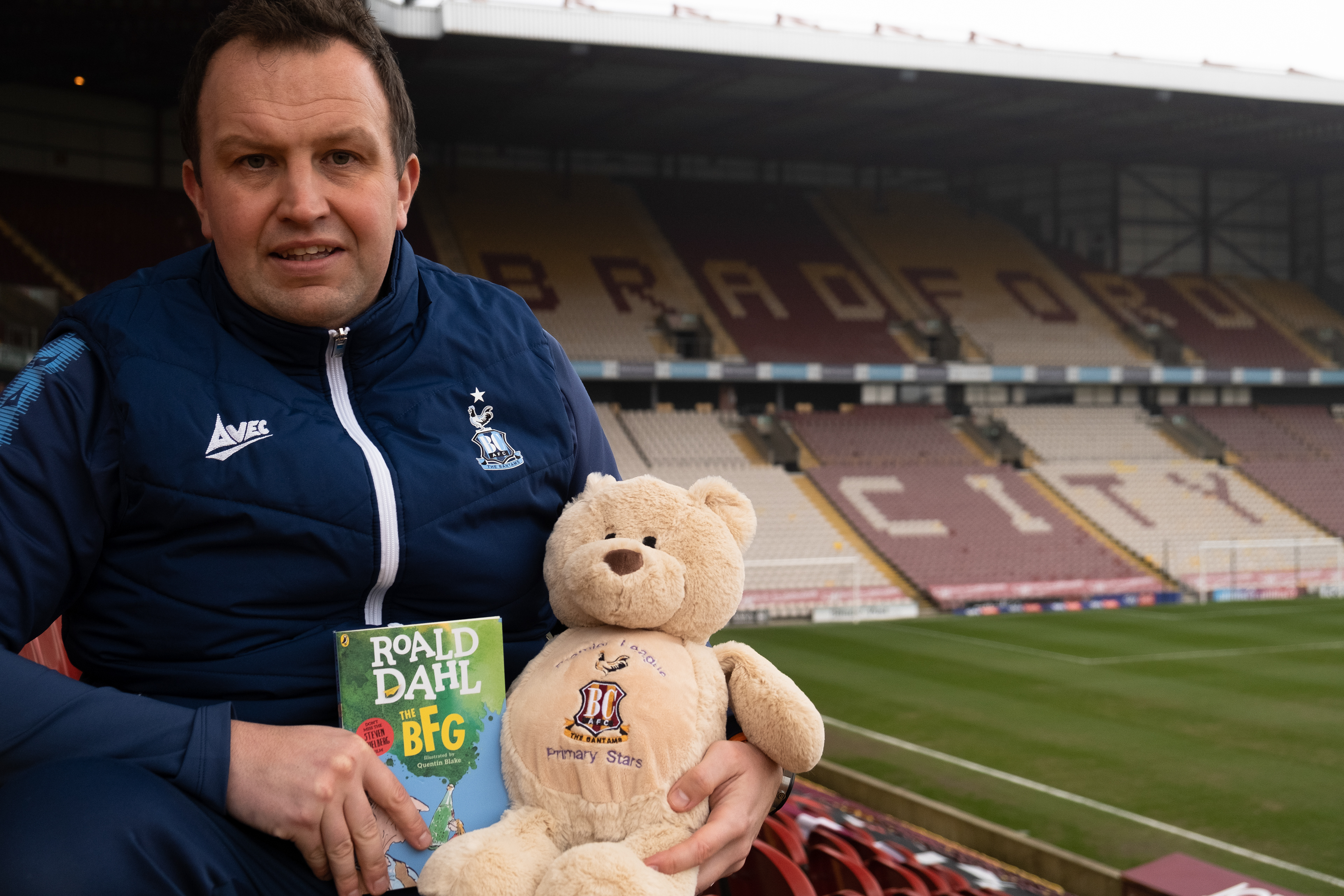 The Reading Bears programme has been recognised by the National Literacy Trust and is also inspiring other football clubs through shared good practice. It breaks down misconceptions around libraries and shows children how to find books they are interested in at their level. “There’s so much variety in literature these days, like magazines, audio books,” says Gareth. At the end of the course the kids get a trip inside the beautiful Waterstones in Bradford city centre. “A lot of children don’t tend to go into town, so it’s like an adventure for them,” Gareth explains. As part of the programme they’re allowed to select a book to take home. “One Christmas this lad was so excited, he picked the Polar Express so he could read it to his brother over the holidays.”
It’s only in the last five years that Gareth has been comfortable speaking about his own struggle with reading. “At FA coaching courses I used to dread flip charts or pieces of paper in the middle of the table. So I’d tape my fingers up beforehand and pretend I’d broken my fingers because I didn’t want anybody to give me a pen and ask me to get up in front of the class,” he says with a smile. “I tell the kids in class that story and they don’t believe me, but it builds some trust and shows that I know how they feel. To this day, no one has ever challenged me about my ‘broken fingers’ and I’ve always gotten away with it,” laughs Gareth.
Another aim for Gareth is about keeping kids occupied. “As a football club we’ve done a lot of work with West Yorkshire Police and the Serious Organised Crime Unit and some kids will get to a crossroad in life where they get a choice of two roads,” he explains.“Maybe in reading kids will get lost in it, and find a gateway which leads to them getting a job rather than going down the criminality route.”
Gareth wants to set kids up to win. “My dyslexia has given me a bit of drive in life and football has taught me a lot about winning, losing and resilience. Sometimes life isn’t fair and you’ll get knocked back but it’s how you go about doing better next time,” he says. “As Bradford FC Community Foundation we don’t just want to get the club up the league tables, we want to get Bradford up the literacy tables too.”
Using his influence within the world of football, Gareth is meeting children at their level through a shared passion. He’s turned his own battle with literacy into a lifeline for those facing similar challenges. By removing roadblocks and nurturing existing interests, he’s championing children to build stronger foundations from which they can pursue their dreams, providing brighter futures for many.
↑Back to Top